This was a piece I made a few years ago, and was sitting on a shelf in my office. It was made using an approximately 300 year old Cornish roof slate.

I recently reworked, polished and enamelled the plaque (using metallic copper enamel to match the natural colours in the slate). This piece is currently on sale at The Hub on The High Street, Innerleithen.

This design is based on the cup, ring and channel carvings found on the east face of the  so-called ‘Runic Cross’ in Innerleithen. However, there is little evidence to suggest it was a cross (and there are certainly no runes on the stone). In 1871, the stone was found during the demolition of an old church in Innerleithen, forming part of the foundations. Given its use as foundation material, this would suggest that the stone was deemed only fit for building material and many Christian sites used megaliths for this purpose, or were built directly on top of sacred sites.

Another four of my ‘Uru-Anna’ plaques (design © HatchBurnCarve) that I sent to Kilmartin Museum Shop (number XI to XIV in an open-ended series).

This cup and ring design is based on the Orion constellation and influenced by the rock art found in Kilmartin Glen. I make these regularly to keep up with demand (these four sold within a matter of weeks) and some are occasionally available to buy from my Etsy shop (or you can order direct- please use the contact form, or email hatchburncarve@yahoo.co.uk).

On sale at Kilmartin Museum Shop. I’ve made some more of these which are now available to buy in my Etsy shop. 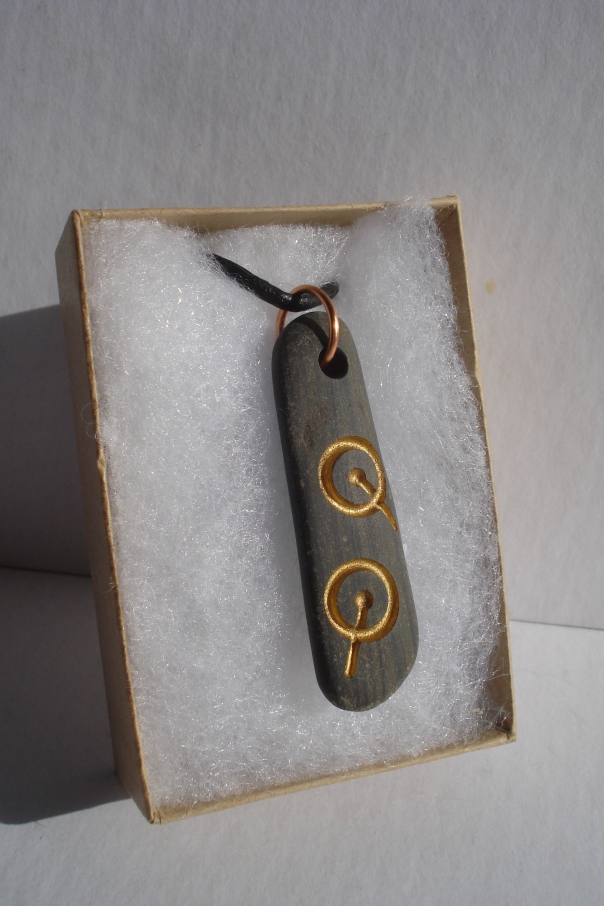 An exclusive design for Kilmartin Museum Shop, and on sale there now. 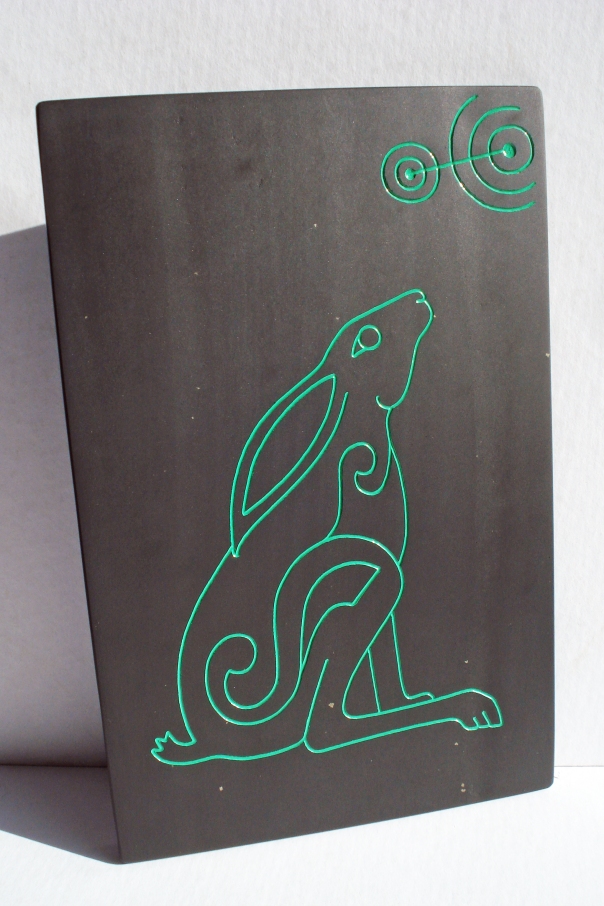 ‘Stumbletree’- probably my favourite house name I have carved to date (45 x 15 cm). Entirely freehand carved from a 1 cm slab of slate. The customer had seen my work at Kilmartin Museum Shop and had commissioned me to make the sign with the addition of cup and ring markings based on those found in Kilmartin Glen in Argyll, Scotland. 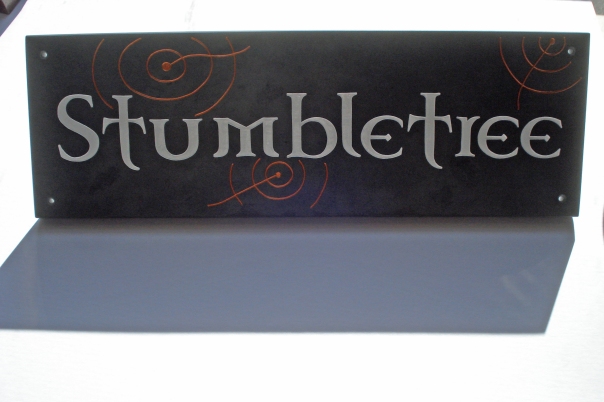 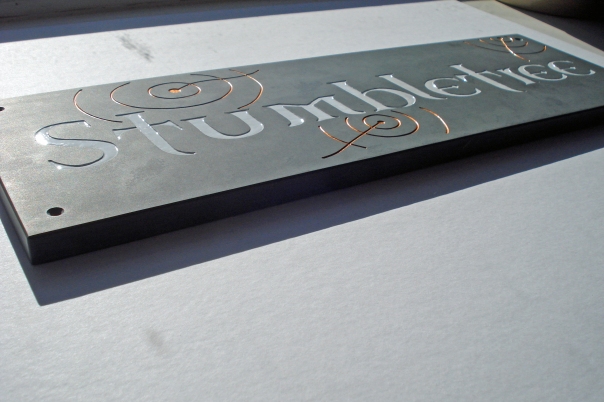 Reclaimed slate hearth stone, Cornish beach stones, wood. 37.2 x 23.1 x 17.0 cm.
Insertion of a short cist burial in a stone setting. The skeleton is a reflection upon burials such as those found at Newhaven in Edinburgh and Cladh Hallan in South Uist. The stones around are carved with cup and ring markings based on prominent constellations seen in the skies above Scotland during the four seasons (Orion in Winter, Leo in Spring, Cygnus in Summer and Perseus in Autumn). The style of cup and ring markings reflects those found at Ballymeanoch Stone Row and Nether Largie Standing Stones in Kilmartin Glen. Dimensions of the wooden base correspond to the Golden Ratio/Phi.
This was included in the ‘Shambhala at Shambellie’ exhibition at Shambellie House, New Abbey nr Dumfries (17th to 29th August 2017). 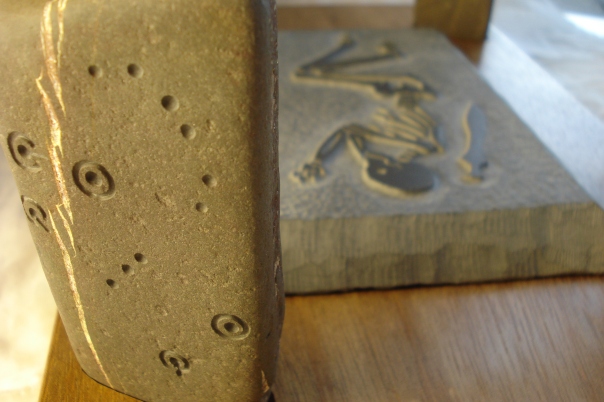 Close up of the skeleton

This is now available to own. Follow this link to my Etsy shop.

Part of ‘A Sense of Place’ exhibition showing in the Tweeddale Museum and Gallery, Peebles from 5th August to 2nd September 2017.

‘An Athame for the Leithen’ (20 x 3.5 cm). Slate from the disused quarry at Altarstone, Stobo. Wood from one of the old church pews from the Church of Scotland, Innerleithen. Blade carvings replicate the cup and ring markings from the so-called ‘Runic Cross’, now housed in the aforementioned church.

This piece is now available to own. Follow this link to my Etsy shop.

Part of ‘A Sense of Place’ exhibition showing in the Tweeddale Museum and Gallery, Peebles from 5th August to 2nd September 2017. ‘Lepus Celestine’ 33 x 26.5 cm. Hand carved from a reclaimed Cornish roof slate (approximately 300 years old).
Exclusively designed for Kilmartin Museum Shop. The design is copyright, except for the rock art, which is based on the patterns found  at Kilmichael Glassary. 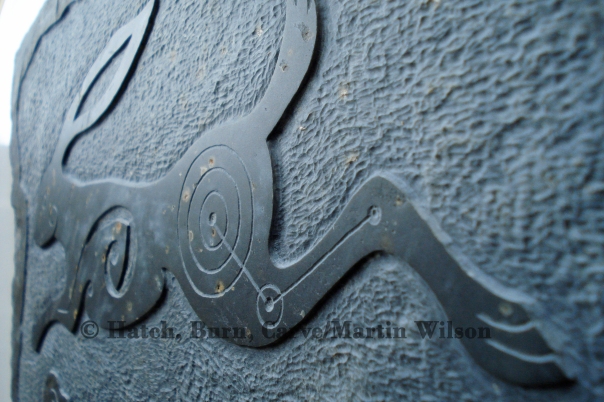 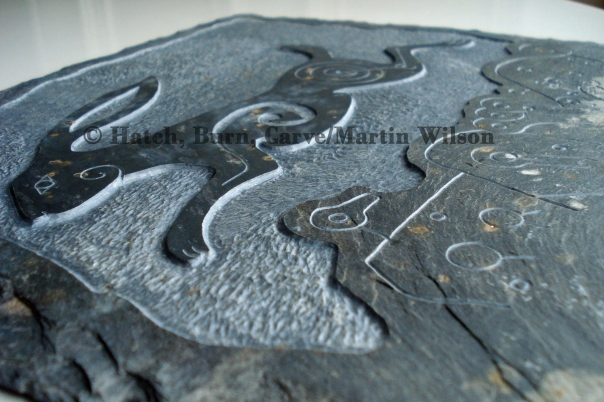